I was invited to speak at The Annual MicroFinance Network (MFN) Conference(29/2–2/3) hosted by BRAC in Dhaka, Bangladesh. The MFN comprises 25 members that serve over 100 million clients in 23 different countries. BRAC has been the pioneer in leading developmental programs in Bangladesh. Right from education to healthcare, BRAC has envisioned and fueled activities in improving the livelihoods of the poor and ultra-poor.

It was a big opportunity for Artoo to be here. MFN members wanted to transform their model. They were concerned about not being relevant in the new economy and wanted to learn from young innovators like Artoo on how to reinvent themselves. We were truly over the moon because we have grown up idolizing them. 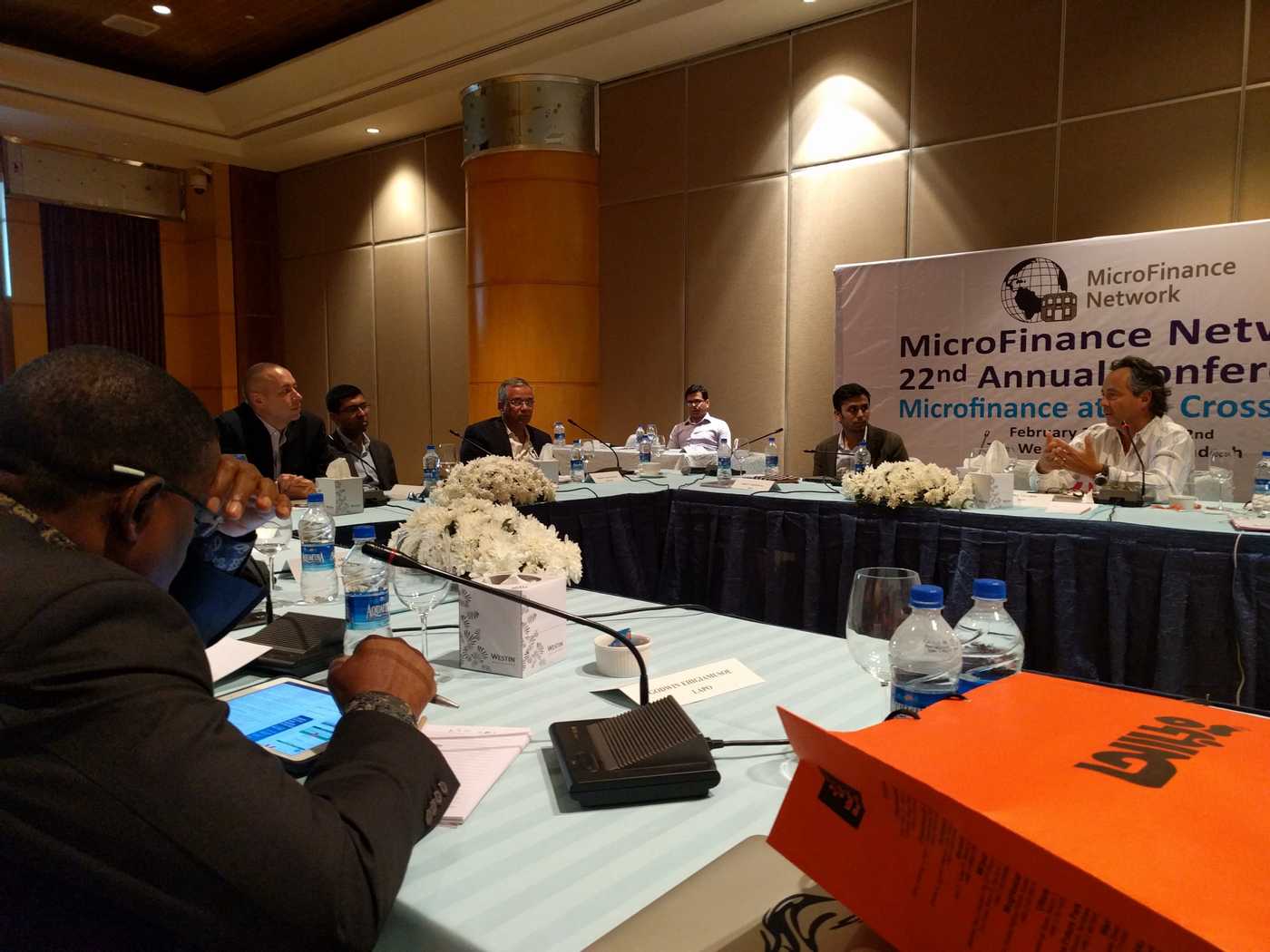 As part of the event, I spent a significant time with the MFN members understanding their challenges and opportunities specific to their geographies. There were attendees from different regions of the globe such as Mexico, Nigeria, Armenia, Egypt, and Jordan. It was amazing to hear their stories, which spans across several decades. While they had specific challenges to overcome, there were enough similarities. The MFN group has been a source of inspiration and bonding: together we overcome! I was ecstatic to be there.

On the first day, I went for a field visit to bKash . Founded by Kamal Quadir and his brother Iqbal Quadir, bKash is a subsidiary of BRAC bank that provides mobile financial services through money exchange on mobile phones. bKash agents are mediators who help customers with their financial transactions. Customers can send and receive money through mobile wallets, which makes it an affordable and easily accessible product that is cashless and paperless.

The model is not new — it’s there in India as well. However, regulatory ease-ability to cash out isn’t there yet in India. Even so, the scale is truly awesome. Agents maintained $2k as float — something which is unheard of in India and testament to the kind of business they were able to generate. Each cash out entailed 1.85% commission, and 70% of it was shared between agents and super agents (distribution network). The transactions were performed through basic handsets.

Overall, today bKash is being used by 21.5 MM customers, a scale that speaks for itself. A striking feature is that customers don’t even need phones. All they have to own is a SIM card. Then, they can get their desired transaction done through an agent. A poor migrant father, for example, can come with his money and SIM. The agent will put his SIM inside his phone and do the transaction on his behalf to send money to his son who is attending college away from home.

bKash was an innovative way to include and expose the ultra-poor to affordable financial services. The first bKash agents were initial BRAC borrowers, which inculcated in building trust among the new users as well as was a driving force for any business. When they had to scale, they tapped into commercial distribution networks.

The next session I attended was innovations at BRAC. Here, we learnt about the story of BRAC and its origins. For a country with a high infant mortality rate, BRAC was instrumental in reducing the percentage from 25% to a meager 4% by educating the mothers on how to keep themselves and their kids hydrated. All they were taught was to include sufficient proportions of sugar and salt in drinking water. This simple idea impacted 30 million households comprising approximately 14 million women, a breakthrough in the field of healthcare, and helped reduce the mortality levels.

The key learning from this session were IIMLA — Innovate, Implement, Measure, Learn, Adapt. The entire life-cycle of introducing something new, be it a product or a service, is based on these five phases, which help you track the performance of your solution. This holds true for every enterprise. When we started out, Artoo was piloted in five test branches. With the encouraging results after several iterations and fixes, we now have a full-fledged Intelligent Digital Loan Origination System that is being actively used by more than 3700 users in 400 branches across India. This drives us to create products that can impact and help the masses.

Although it’s easy to replicate an external product and its features, it’s not always necessary that the same model will work for your enterprise. The value proposition determines how your product will fare in the market. The key is to develop and maintain partnerships with all stakeholders and keep reinventing oneself. BRAC’s philosophy is that wherever they saw a problem and figured they could do something about it, they did it — this resonates a lot with us.

When you meet people who work in the same space as you, they often offer interesting insights about your domain. The MFN conference was one such event that I was delighted to be a part of. You were introduced to great work done by people and exposed to several ideas that inspired you to do more for the community. The future looks good from the current scheme of things.

The next day was my presentation about Artoo. I spoke about our journey and our experience in scaling Artoo. I also spoke about the highs and lows at Artoo. It was an extremely interactive and engaging conversation around technology. The driving force however was empathy. Every one present there had a common disregard for profitability, and we unknowingly had created the biggest thing ever in FinTech — something with our own hands while focusing on the customer — keep what works!

At the very end of my speech, Shameran Abed, BRAC’s Microfinance Director and Enrique Ramirez, Compartamos Banco, raised a question: “How do you see us — the MFIs? Specifically who do you think is going to remain relevant between the FinTechs and MFIs?” I had a feeling that they were going to ask me this question; so, I had a slide ready to address this query.

I was able to learn so much from these stalwarts and got a renewed sense of energy and purpose. I was also inspired to apply some of the principles from BRAC at Artoo. It was an absolute honor to be part of this speaker session!